The majority of this piece is based on a material created by reading from a simple wavetable. The order of reading that waveform is determined by a lookup table, which starts very simple: index 1 refers to 2, 2 to 3, finally the last value back to 0. However, during the evolution of the piece, the static values within the ordering table are replaced by functions that may change their value over time, thus creating a spontaneous reordering of the waveform. Sometimes this may result in loops, noise, a complex tone, or even silence. To prevent the process from getting “stuck” in a noisy state, another process is slowly overwriting the functions with a static value again.

The material is further processed in multichannel transposition and looping patches, which use feedback by recording and processing its own output through a microphone, incorperating the acoustic properties of the space in which the piece was created into the end result.

Many thanks to Luc for helping me with OCaml and Wouter & Miguel of course for their work on WFSCollider.

In most of my recent works, I approach music from a low level: I generate sound using algorithms that construct the waveform on a sample per sample basis. For my work in Klangraum this approach would not make so much sense, I thought it more interesting to use the inputs from the audience as fully as possible instead of generating my own sounds as usual.

Instead of manipulating that input on the amplitude level, I have restricted myself to pure time manipulations. Practically, this means the sound from the audience is recorded into a memory buffer of my software and then read out using various shapes for the time (similar to shapes I previously used for amplitude).

The title comes from a concept from quantum mechanics where a particle in “superposition” gets influenced by its surroundings and looses its quantum state.

Special thanks go to Luc Döbereiner and Martin Lorenz.

I provided a small piece for the segmod CD release, you can listen / buy it here: 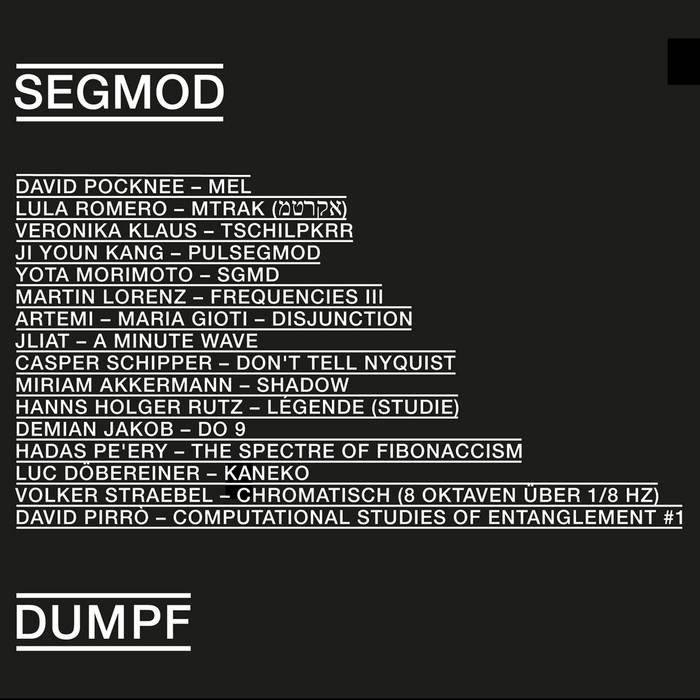 The initial source of this piece are the four short electronic interludes within “Valles Marineris“: an instrumental piece composed by Ángel Arranz (involving more than 100 saxophones), which was performed during the Chasmata concert that took place in the Guggenheim Museum, Bilbao, last year [1]. The programs I used to create the four electronic interludes have been extended, reworked to form a new piece that was specifically composed for a Azimuth concert that took place on 24th of March in The Hague.

The musical materials within Valles Marineris were inspired by scientific images taken by the Mars Express Orbiter (from ESA), which feature enormous geographic structures on planet Mars. A brief section at the start of the piece is a direct audification of the raw data coming from the orbiter (made by composer José López-Montes). The rest of the electronics are formed in a somewhat similar fashion as the geography on Mars: streams of values are eroding through a vast numerical possibility space. The title comes from “Noctis Labyrinthus”, which is the most western part of the Valles Marineris, the largest canyon on Mars.

Thanks to the Azimuth team for giving the opportunity to work for multiple days on their fantastic speaker system.

[1] A video recording of the Chasmata event is available on youtube: https://youtu.be/bACHXWfe1A0

Translation is a piece especially composed for “Post Scriptum 2”
, a CD set with music from the Institute of Sonology made possible with the legacy of Dick van der Post (1950–2015).

The piece itself was made using Cisp, Chuck and WFSCollider.

The title comes from a joke:
Q: How does a physicist milk a cow?
A: Well, first let us consider a spherical cow in a vacuum…

“A spherical cow is a humorous metaphor for highly simplified scientific models of complex real life phenomena. The implication is that theoretical physicists will often reduce a problem to the simplest form they can imagine in order to make calculations more feasible, even though such simplification may hinder the model’s application to reality.” (from Wikipedia)

In this piece, the programs used to generate sound have similar (over)simplified models of harmony, musical progression, timbre en rhythm.

A piece resulting from writing ChucK  programs that write values straight to the dac. It was composed to be played in a larger space, it’s short impulses triggering the acoustics of the space.

A non narrative poem on the nature of digital sound. This piece should not be played softly and preferably on loudspeakers.

In the development of this piece I tried to use a different approach to the large form. Instead of first creating material and then finding a suitable form for it, my starting point was composing a structure that could both be used for the large form as well as the material from which it is constructed.

This was the piece I composed for my final exam at sonology.
It features many sounds created by my software written in Python
and Csound, that are further transformed in Max/MSP patches.

This piece was made by using midi to control the analog
equipment in of the analog studio at Sonology.

With sounds created exclusively in the analog studio at Sonology